Nothing beats a good knife. Blunt knives, weirdly balanced or shaped knives, design unfit for purpose can all make what should be a simple job, tedious. The Svord Santoku range, however, despite a 'specialised' design makes a very capable general purpose knife.

I initially thought it was someone pissing around on...
Read more
Table Of Contents

The Santoku​1​ style knife has become rather popular in the last few years – it’s almost safe to say it is the hipster hunter knife of choice. 😉

So, what is the Santoku knife, what benefit (if any) does it provide, and why should you consider picking up one of the phenomenal Svord made ones?

The Japanese know to make knives. In fact, when they put their mind to it, there seems to be something in the Japanese psyche that leans itself towards mastery of whatever the focus is.

What is interesting to observe is how different cultures, over time, have developed their own way of doing things – shaped by their specific needs and environment. Knife design is no different.

Japanese design actually has multiple knife shapes – the Gyutou being the equivalent of the ‘standard’ chefs knife we are likely most familiar with. The Santoku is still considered a ‘multipurpose’ style knife – but is has a few significant design differences compared to what you might be used to.

A Santoku knife is generally has a taller profile and flatter belly than a traditional European style knife – and will often feature more of a rounded tip than the point found on many chef’s knives. Like many Japanese knife designs, there is no ‘tang’ where the blade goes into the handle, and they normally feature a single bevel blade – that is ‘ it is only ‘sharpened’ on one side. Yes, I realise it’s still got two sides to the edge, but I am sure you know what I mean.

In addition, the Santoku knife, like many Japanese knives has a much thinner width than a typical European chefs knife. This, combined with the single bevel results in a sharper cutting angle, and generally, a sharper edge. The design also lends itself more to a chopping motion, straight up and down, rather than the rock you would do with a blade with more of a curve along its belly (bottom edge).

On the flip side though – the thinner, finer edge is a little more delicate. Look – to be blunt, I don’t really look after my knives well – so this isn’t too much of a supprise – but – I have managed to put a nick in the SS edge. It does effect the function of the knie, at all, and the photo makes it look way bigger than it actually is, but, some of you might be triggered by this.

The Svord offering features a Stainless Steel or Carbon Steel option, and a variety of handle materials. Though stock options are normally polypropylene in a variety of colours.

My wooden handled one is actually a ‘custom’ made – which Brian was kind enough to put together out a bit of Wenge wood he still had – that matches a couple of other knives of his I own – a 370BB and a Golok.

I originally got the SS wooden handled version, and recently added a second Carbon version as well.

Now, I won’t be going too far into the realms of various steel compositions and their characteristics – as the tempering, treatments and so many more things come into play to result in the final outcome. Some generalisations though. based on the two examples I have in my personal possession.

The Stainless, rather obviously, stains less. For most people – this is probably the biggest perceived advantage. They ‘seem’ cleaner and easier to look after. My personal preference though, for many years – has been the higher carbon steel knives and the ‘work patina’ they develop. Sure. Leave them on the bench without wiping them down after cutting a tomato or something else acidic (fruit, for example) and you will have brown stains develop on them fairly quickly. A quick brush with steel wool fixes this though – and really – I prefer the look anyhow.

To me, the carbon steel also seems to sharpen, or more correctly, hone easier – I always thought it was because of ‘softer’ steel – but recent reading indicates that might be the case. Regardless – to me – the carbon version gets an edge better – and keeps it better.

The Santoku, is Stainless or Carbon Steel – is considered part of the Kiwi Kitchen Knives range. By my understanding, while the steel is the same as what is in his high end ‘bespoke’ knives – the fit and finish on these Kiwi knives is a bit quicker, a bit rougher.

In the case of mine – this meant a little bit of sanding on my part went a long way. There were a few ‘burs’ left over by the absence of hand finishing – a labour and therefore cost-saving choice on Svord’s part. Which is why the price of these things is remarkably low.

Now, one thing about a one edged blade design, is they tend to push unevenly through the food. This means, in theory, there are left and right-handed versions of these things. I am left-handed, and I cut left-handed, and while, yes, I do notice the blade does push over to one side (a little) it’s not something that has ever been an issue for me. The idea is that the edge pushes the material being cut away from the edge – so I suppose if I was cutting a lot of very fine, rather sticky material, it could be useful – but seriously – not been a problem for me.

The Santoku, and generally, thin blades overall are most usefull for slicing and chopping – fine work. I use it for nearly everything in the kitchen, but, would go to a differn’t knife for skinning and boning out and animal, for example.

However – meat, from steaks to fish, vegetables, fruit, herbs – it all deals with easily.

Basically despite (or maybe because of) the design idiosyncrasies, the Svord Santokus I have quickly become my go-to chefs’ knives in the kitchen. they are a little too big for smaller delicate work – but as general-purpose options, they are pretty hard to fault. A regular hone on the chefs’ steel keeps them razor-sharp, a quick wipe after use keeps them clean. They are a pleasure to use – and considering their price – I would suggest everyone head out and grab one immediately! (I paid retail for both of mine). 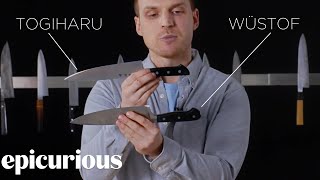 Join The Blokes
Table Of ContentsThe DesignMetalsThe FinishHandednessUsesThe Svord Santoku The Santoku​1​ style knife has become rather popular in the last few years - it's almost safe to say it is the hipster hunter knife of choice. ;) So, what is the Santoku knife, what benefit (if any) does...The Svord Santoku