I recently was asked to help set up a clients rifle. A Sako Carbonlite in .308 topped off with a Swarovski dS rifle scope.

It was a great opportunity to check out a top range rifle scope, and, not one I would normally come across. I was certainly interested to check out the piece of premium glass from a highly renowned company.

This thing is a beast! A 40mm fat central tube of the Swarovski dS means that it even makes the big 34mm scopes I am used to, look petite, and, weighing in at just over 1kg (1090 grams) – it’s no featherweight either. To put it into context, the Sako itself weighs around 2.4kg, however, the Vortex Razor HD II 5-25 – my previous tank of a scope, weights 1.35kg.

However, I do think it is a lovely looking piece of kit – and certainly exudes a level of quality you don’t always find on scopes. However, at this price point, you would also expect that.

What’s a little confusing at first though, certainly for someone like me who is primarily focused on long-range shooting, is the lack of turrets. Sure – many hunting scopes have capped turrets, but this is a little different again.

For a start, if you take off the top cap, where you would expect the turret to be – you are greeted with a battery compartment, and a couple of tools to open up there side panels, where, the adjustments for the zero can be found.

Before we talk too much about the setup and details of the scope itself, it’s important to provide a bit of the concept behind the Swarovski dS.

This is, essentially, a point and shoot scope. Line and animal up, push a button on top, the scope ranges the target and instantly returns a point of aim within the reticle, including wind holds.

It does this (in theory) out to 1375 meters. I mean. What doesn’t sound good about that! 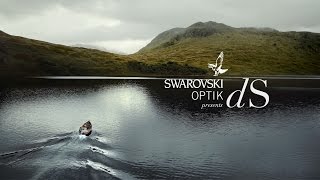 For people wanting to stretch out the legs of their firearm further, but want to combine the scope, rangefinder and ballistic computer into a scope optic with phenomenal glass and a zoom range of 5-25.

Zeroing the rifle was simple. I took the caps off, read which way to adjust (it’s opposite to many scopes), bore sighted, on paper, adjusted, confirmed – good to go! Like it should, the adjustments on the scope do what they should, to the amount the should, and hold.

Eye Relief seems short. Like, real short. Because of the tube size (40mm) you are limited with your ring choice. This could mean that you can’t actually set it up with the correct eye relief on some rifles. I would suggest you test before you buy. Some Swaro’s (like my Z3) can be a bit notorious for encouraging scope bite, so I would always be a bit wary on a big, big rifle – though proper form should prevent that.

The next part was a little tricker.

Essentially, there is a ballistic calculator built into the scope, and that needs to be set up via an application on your smartphone. I downloaded it to my Samsung, and, very quickly, loaded up the box BC, velocity and details.

You can customise a fair bit about the reticle in the Swarovski dS – thickness, size of aiming dots, windage indicators and more. It really quite a nice setup.

The Bluetooth connection seemed to require the phone nearly be held literally touching the scope for it to register, however, the transfer to the scope itself worked fast enough. With the ballistics loaded up into the rifle, I turned around from the 100m zero target to the steel out to 700m.

300m, 450m, no issues. 700, slightly low, which, isn’t really unsurprising. Often, I find the ammo box velocities are higher than what you get out of a rifle – the target barrel they used might have been longer, and the actual velocity needs to be confirmed over a chronograph, or, even better, at the actual distance.

As it was, I did actually have the Labradar with me, so I had already entered a ‘true’ velocity, but even then, it’s not uncommon to need to true the ballistic calculator.

This was a little bit of a challenge.

While the Swarovski App does provide a mechanism to true the calculator, it requires you being able to take two velocity measurements. Now, the Labradar can do this, but I still question if a maximum distance of 100 meters (and normally the Labradar won’t track that far) – is actually far enough to provide worthwhile data when it comes to velocity, and more importantly, BC.

Instead, I would normally use the Kestrel/Applied Ballistics method of entering an actual drop at a far distance (like 700 meters) and the system back calculating it that way.

I am not sure if it’s simply Swarovski’s Euro-centric thinking, or, more-so, assuming the end user isn’t likely to true the system at all – but – because there are no dials, and no entry into the app, apart from arbitrary changing figure – basically, you have to change a number, take a shot, hope it was closer, change again, and so on. In the end, close enough became as close as we would get.

Which was, incidentally, perfectly fine to shoot out to 700 meters. Realistically at that distance, with factory ammunition, 700 meters was about the limit anyhow, and while there were misses at that distance, it wasn’t necessarily the fault of the scope. More, error budget and bluntly, my shooting coming into play.

But yes, in short, the ballistics function works. For what I would imagine the realistic distances this would be used at, it’s going to do the job nicely.

Well. It’s a Swaro, so it’s phenomenal. It’s clear, sharp, and virtually free from any chromatic aberration (to my eye, at least).

However, despite the large tube, the Swarovski dS has a rather narrow field of view, lower than you would expect light transmission, and, interestingly, a rather narrow depth of field with the parallax. I think a lot of this is due to a big whack of the tube actually being taken up with electronics, i.e. the rangefinder.

And – here is a pinch – because of this narrow field of view, in conjunction with essentially using hold-over for each shot – I found that once you got past around 700 meters (.308 Hornady Match Factory Ammo) – you couldn’t use the scope at anything more than 15x magnification. The aiming dot ends up below the bottom of the scope and changes to a helpful little arrow instead.

Now, I know, I know, you don’t need more than 15x to shoot out to distance. Though, logically, the further you range, the less you can zoom in.

However, you are not going to look through this scope and think it’s anything other than great glass.

It’s probably not going to be my first choice for hunting late into the twilight, though, to be fair, I didn’t try it. It’s a clients rifle, not mine, and not a ‘review’ item either, so I am limited on the situations I can put it through.

Obviously, the Swarovski dS is for someone who hunts in tweed. 😉

Well, for a start, let’s be blunt. You need to have the money to spend to get into this kind of scope. It’s not a scope I would be stretching my neck out for, meaning, if you have a budget, this isn’t in it.

Secondly, I would suggest it’s also for someone who either is relatively new to shooting or, doesn’t have the time, inclination to do much shooting. I don’t really mean this in a negative way, what I mean, is they are looking for a solution that will do most of the work for them. Those who want to get deeper into the ballistics and ‘art’ of shooting are likely going to want something a bit more manual.

For guides, this could be an awesome option – as it removes a lot of the potential confusion with a client. Put the red dot on the animal, press the trigger.

However, it could also lead to a bit of confusion in setup – so we would have to be careful with that. If it’s set up wrong, I could imagine longer shots would lead to a lot of frustration.

In short – would I have one? Well… no – I don’t shoot this way, so it wouldn’t make sense to me. However, I do love the Swarovskis for hunting scopes, and Instead, I personally would go with the phenomenal Z5 (hunting only) or X5i (crossover hunting/target) and one of their equally great EL Range Binos. I am also lusting after one of the STR-80 Spotting Scopes with reticle as well. But this is because of my particular use case.1

I find myself spending as much time behind (actually more) a spotting scope that a rifle at the moment, so being able to spot and range for others becomes a priority. If you are running solo – I can see the Swarovski dS fitting in quite nicely into a shooting system.

How about the Burris Eliminator or the new Sig?

Now, the ‘elephant in the room’ that we also need to talk about, is the Burris Eliminator. This is now up to its 3rd generation, and, to be fair, was likely one of the first of this total solution style scope. And man did it get some stick when it first came out.

I have to wonder, ironically, if now, that Swarovski, Sig and many other companies have optics with electronics in them, that people will start to realise that the Burris was really just way ahead of it’s time.

Now, the Swarovski DS, is, simply put, a much better unit – higher quality glass, more refined system, and, much higher price. So, you would expect it. I mean, it’s near twice the price. However, functionally very similar.

The Sig BDX System is also similar – though still requires a separate rangefinder.

I do find it a little funny that companies are talking about their new scopes as the ‘future of optics’ – credit where credit is due then, the Burris was way ahead of you all.

I have had it pointed out to me – that Burris wasn’t the first to bring out a rangefinder in a scope – in fact, Swarovski had the 3-12×50 LRS a while before the Eliminator was released, and Zeiss and Nikon also had something similar. However, for an integrated ballistic solution, all in one, point and shoot solution. I think so?

Join The Blokes
It's the pinnacle (price wise at least) of 'smart' optics. But does the price of the Swarovski dS really equate to value? Like many things premium, it's a yes, no, yes, kinda answer.The Swarovski dS - Scope, rangefinder, ballistic solver.