GPS options for trail running and, well, anyone.

A members question gets me pondering the navigation options I carry on me.

I wrote an article on my thoughts on these...
Read more
Table Of Contents

“Hey Bro, was after some advice. I’m looking at getting a GPS for trail running mainly & hunting. Ideally, it should be:

I’m looking at doing more trail running by myself and will turn it on when I’m not too sure which way to go direction wise. I’ve got a Garmin watch but don’t want to have to rely on that alone as will drain the battery. If you got any recommendations let me know. Cheers”

– One of the Blokes.

Two is one and one is none.

Key points – heading out by himself, into the backcountry. While it’s all very well to claim “I know this area like the back of my hand” – those old fellas tend to get lost just as much as anyone else – and – according to many LandSAR profiles – it’s the hunters who are likely to try and self-rescue (due to bull-headedness alpha male attitudes) and turn a search into more of an escape and evasion exercise.

If you are planning on heading out by yourself (or really, even with a group) it makes sense not to have a single failure point. I.e. only one method of navigation on your person.

The other consideration here is for Trail Running, where you want a quick reference to keep you moving – and this is one advantage I can see of a digital-based map over a traditional paper one.

If I am heading out, I will have my Garmin Fenix on my wrist, able to provide Topo Grid Coordinates which I can then apply to my physical map. If I am just wandering about, I use either the compass around my neck (Silva Expedition S) the one on my pack strap (Sunnto Clipper) or the digital one on my wrist (the Fenix) to give me a bearing – having already formed a fairly good idea of where I want to head, generally, using a physical map that I have printed off MapToaster and laminated. MapToaster allows to you print out just the area you want, and scales and applies the grid lines and declination for your map. You can read more about my workflow over here – https://goodblokes.nz/practising-navigation-garmin-tactix/

If all that goes pear shaped (somehow), then I can also just turn on the phone (because I tend to turn it off and store it in the pack when I lose reception) and refer to the NZ Topo50 Maps I have stored offline on the device. The phone will give me a gps lock cellphone reception or not.

Things I don’t use anymore

I used to also have a Garmin eTrex30 – but one of the buttons broke, I was informed it wasn’t reparable, and I really havn’t bothered to replace it.

The Tactix 3 I have does, in theory, have the capacity for maps – but the screen is too small for me to want to use with any regularity – in fact – that was a big reason I also didn’t replace the eTrex – I find most handheld GPS units don’t compare to the overview that an actual, printed map gives you – better for wider situational awareness, and much easier to talk over with a mate and a brew when planning.

However, if I was wanting to have maps being updated on the fly, I think I would tend to head towards one of Garmin’s new products that combine GPS, Maps and their recently acquired inReach system – such as the inReach Explorer or GPSMAP 66sr. These have the mapping systems, so you can read that map on that little screen, but, should you get in trouble, they also combine the ability to send for help. While there are important differences between the inReach and a dedicated PLB, I really like the ability to send texts out through the system as well. It means, should you be delayed, but not in trouble, you can send out a text to make your emergency contacts aware of the change in your intentions (you are leaving an intention plan, aren’t you?)

Which may or may not be a consideration for you, but has been for me.

Most modern devices use their own, proprietary battery. It is rechargeable, but not always hot-swappable. I.e. it’s fixed to the unit and you have to plug it in to recharge the unit. This means some folks will carry a power pack with them to recharge the unit – but I still hang onto this old solution called replaceable batteries. 😉

I like units that take AA batteries. Specifically AA. My headlamp uses them, my torch uses them, I ideally want all my electronics to use them. It is becoming harder and harder to achieve this though.

Though power use management goes a long way (if you don’t need it turned on, turn it off) – it’s always nice to know you can also pop into a store on the way out, should you find you have forgotten to charge the unit before the trip.

This leads me to the eTrex again – even the current models all the use of the AA battery – it’s a small, easy to use device, and could provide the GPS and mapping capability. Though no inReach. Though, the inReach mini is back to an internal battery – so maybe it is time to ‘upgrade’ to a power pack of some kind and swap all my devices over to a USB charge option. I do have a SolarMonkey – it’s just more weight and I would still have to carry batteries for a while.

What I would do

I think I would tend to stay with my current system, on the whole. The watch to give me my cords if I get truly lost, only turning on the GPS long enough to get the lock. This means I would have a battery life way beyond the amount of time I tend to spend out in the bush, and would then just refer that back my physical maps. I have some backup between the two systems, if the watch dies, I just get out the map and compass and go old school, but the watch speeds up having to triangulate my position.

However, I am seriously considering adding an inReach of some kind to the setup. While I have a PLB already, I do seriously like the option of texting things out. But – I am holding back because the inReach doesn’t have the 406MHz radio beacon signal that a PLB will. This allows the final approach to be conducted a lot quicker – as once the GPS location is reached, the rescuers can track the radio signal as well. 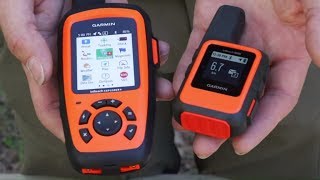 Do I have to buy one of the high end watches for this?

It seems that shortly, no, you won’t. The challenge, in part, has always been that only the higher end watches can give you the topo grid coordinates – many of the lower end ‘GPS enabled’ watches only gave your tracking information – not simply reported your position so you could use a map. However, the new Instinct range from Garmin looks like it will provide the coordinates in a cheaper watch – one that will also have solar charging on it to help with battery management! My Fenix 3 is now starting to show it’s age – and I am keeping an eye on this new range – as realistically, I don’t use the majority of the function in the Fenix. A watch that can give me the Topo50 format is really all I want (oh, and the stopwatch is nice as well).