I guess there isn't a huge amount to say...
Read more

I have had the VRTBR gear for a little while now. And though I haven’t done any hunts in it, I have been working on the range, water blasting in the rain and generally giving them a good wear and workout.

The VRTBR Hunting Edition is definitely a system – so I am going to do a series of articles – focusing on each of the parts of the system, before a final article on the system on the whole.

First, starting from the inside out, the next to skin thermal layer – designated the T2 Base Layer in the VRTBR system.

This is a Merino/Synthetic long sleeve, long-legged set of thermals – that has quickly become a regular part of my winter wear both indoors and outdoors.

I am not going to subject you to a video of me wearing just my thermals. I will leave that to Kenneth.1

And by that, I mean lean and long.

Talking to Malene, the designer, I noted that the length on the cut was a change from what I was used to. Welcome, but different. The thermal top goes down to mid-thigh. Which means there is no way it is going to ride up and expose your back while bending over. No updrafts.

Malene responded that the cut was intentionally made longer – in a more traditional Nordic manner – and it’s true – it’s only in modern times that shirts and the like have slowly become shorter and wider, to accommodate the ‘changes’ in modern man’s physiology.

To be blunt, this is not gear for the portly.

The sleeves are long but tapered, so tht it stays out of the way when you push them up out of the way – while gutting an animal for example. When it gets cold, pull them back down and hook the thumbs through the loops – nice and snug!

Details, its the little things

Now, I don’t have a particularly hairy chest – but I imagine if you did, you would appreciate the inner tab that keeps the zip away from your skin at the top of the zip.

The stretch panels on the trousers give enough that the material doesn’t ride up the legs as you bend over or move – which happens on a couple of pairs of merino tights I have – you don’t find yourself pulling the leggings back down after a few hours of activity.

While I have been wearing the large, I could see that the medium would also fit – just tighter – but the large seems to be the best balance of tight to the skin without being claustrophobic like compression tights.

The T2 Base layer is made out of Powerwool, and while there are a few hybrid merino-synthetic materials out there at the moment – Powerwool is a little different in that is doesn’t ‘mix’ or blend the two materials as such. Instead, the inner side of the bonded fabric is merino, the outside synthetic. This means that the wicking and warmth of the merino next to the skin, while the outer layer helps provide some extra durability, and keeps the wools shape when washing or stretching the material.

For me, I notice that the layer feels just like my pure merino thermals, but the layer doesn’t seem to suffer from the sag that merino can exhibit after a couple of washes and wears. 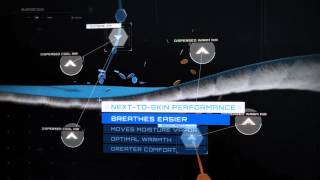 Though I haven’t worn them for a week without showering (yet) I have worn them without washing them for a decent amount of time2 – day and night – and am pleased to report I wasn’t thrown out of the house. So – it seems they retain the ability for Merino to not hold a smell, unlike some of the old polyprop’s that nearly needed to be binned (or burnt) after a decent trip.

A great start, a great base

All in all, these thermals have impressed. I am wearing the top as I type – not because I need to be wearing an ‘outdoors technical layer’ – but because they are so comfortable, warm, and nice to wear. The stay warm when wet, dry fast, feel good, look good… it’s a great start for a clothing system!

Join The Blokes
I have had the VRTBR gear for a little while now. And though I haven't done any hunts in it, I have been working on the range, water blasting in the rain and generally giving them a good wear and workout. The VRTBR Hunting Edition is...The VRTBR T2 Base Layer - modern thermals.