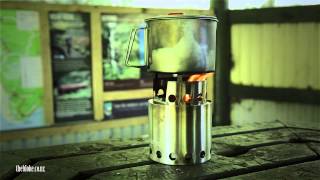 Introduction – cooking in the outdoors.

Food. Love it. Certainly not something I want to have to skimp on too much when out in the bush. Food, and how you plan on cooking it, plays a large part in your outdoors philosophy. Whether you are packing a cast iron fry pan in the back of the car or living on muesli bars for the absolute minimum of weight, food is an important part of your backpacking experience. While weight is important to me, being able to cook a hot meal at the end of a long walk is a major personal boost, both in regards to nutrition and morale.

Evolution of an outdoor cooking system.

My system has previously settled on the lightweight MSR Titan Kettle and Cup, using the MSR Pocketrocket and 100g Butane Canisters. It is a relatively light system and works well. I have experimented with the alcohol stoves, starting with Military Surplus Triangia Stoves, as well as home-made versions and also the Vargo Triad. These are cool little systems, but really seem to be more suitable for the person trying to get away with the absolute minimum weight. I personally didn’t want to have to measure out exact amounts of fuel each time, and they did seem a little finicky. I didn’t really need to make any changes – but was interested in trying out another ‘family’ of cookers – the wood-burners. After a little research online I came across the Solo Stove, produced by a company in Fort Worth, Texas, the Solo Stove is a Solidly Manufactured 304 Stainless Steel ‘biomass stove’. The Solo Stove essentially is an optimised, portable camp-fire – it means you can pick up twigs and sticks along the way, and use them to heat and cook. It appealed to my ‘bushcraft’ ideals, and I ordered one. I have pottered around with it for a bit now, and will continue to do so. I love the smoke and the smell of a fire. But the reality is, that in most places in New Zealand, you can’t really just light up a camp-fire to cook on. This little unit gives you the opportunity to have a small, very well controlled camp-fire, that is also optimised for efficiency.

The Solo Stove is easy to get going, and boils water a lot faster than you might expect. There is really only two ‘heats’ though – flaming or just none at all. I guess you could let it burn down before putting the kettle on top of it, but then each time you added more fuel it would flare up again. In fact, overall, it’s a great system, and I really enjoy using it. The one bugbear I have with it though, but potentially one I can live with, is the amount of soot I get on my kettle when using it. Sure, I can clean it off, or just wrap and pack it and worry about it later, but every-time I accidentally brush/touch/rub against it, I wonder if it’s worth it. Because I am generally near a  stream when camping, I often just grab some rocks and gravel from the bottom of the stream bed and give it a scrub, but it’s something that I don’t need to do with the Jetboil.  I think the biggest appeal of the system is really the aesthetics of it. It is nice to be cooking off a ‘camp-fire’ when out in the bush. One other option, I haven’t tried yet, but would be interested in doing so, is the Kelly Kettle. A traditional Irish design, the Kelly Kettle is essentially a method of boiling water, where a kettle is wrapped around a chimney – there seems to be less mess involved. Check out the linked site.  The current system does pack together nicely. I needed to replace my Titan Mug with a Sea to Summit Folding Mug – just so I could fit it nicely all in one bag. The Solo Stove gets a lighter and some cotton wool tinder in it, then in a bag, which nestles nicely into the Titan Kettle, which goes into a bag on top of the Mug.

So – an important factor here – what do these sets all weigh?

Well, a quick measure-up gives me 489 grams for the Solo Stove system, and 455 grams for the Pocketrocket system, with around half a canister of gas – and that right there, overall, is going to be the main difference – fuel. Essentially, with the Solo Stove, you carry no fuel – just some tinder (I do carry some Esbit Tablets through, just in case). With the Pocketrocket – you have to carry your fuel. Overnight – not so much, but over multiple nights – I guess it could add up. What I need to do is put together some kind of calculator to figure out how long a given weight of a fuel canister is going to last me. Really though – if weight is your absolute main priority – then you are probably using an alcohol stove anyhow.

It is a pain to cook in. The heat transfer is so quick, you are pretty much assured to burn food onto the bottom of the kettle. This isn’t a problem with boiling water, but making custard (one of my indulgences) can be a bit tricky. You just need to make sure the heat is all the way down. Of course, with something like the Solo Stove, that means letting it burn down a bit.

So yes. Like many things related to the outdoors – part of what I really enjoy is trying different set-ups, and seeing how they compare. Realistically – it’s all lighter than it ever has been. I like the Solo Stove because of the smell of burning wood. The soot is a little bit of a pain, but worth it. After all – it’s no more messy than cooking on a  camp fire and humanity has dealt with that for many years before we got all these fancy other ways of heating water!