Taking it in the head

Over the weekend, I watched two shooters scope themselves – that is, the recoil of the firearm pushes the scope back into head, above the eyebrow – generally cutting the head open. Due to the nature of head wounds – this then generally results in a spectacular injury – as the head tends to bleed a lot.

Very quickly, you have a person holding their head, with blood pouring down over their face. It’s a bad look.

However, despite some people trying to claim that a strike scope is a ‘rite of passage’ (*cough* meathead *cough*) – there is really no reason you should ever get it in the face with your firearm.

Kirsten Joy Weiss provides us with a great video explaining how to avoid scope strike.

There are generally, two ‘mechanical’ reasons that people suffer from scope bite.

Those being poor shooting position and poor rifle setup. If you don’t correctly shoulder and hold a rifle when it recoils, instead of you moving back with the rifle, it’s going to head back on it’s own and hit you in the face. Combine that with a scope that is simply set to close to your head in the first place, and you have a combination that is likely to leave an impression and a scar. But, unfortunately, the scar on your forehead may not be the only lasting impression of the incident. The long-term effects to your shooting may actually be a bit more serious than a bit of blood.

Of course, beyond the initial embarrassment of the injury, a scope strike can also help in developing an involuntary flinch with a firearm – as the shooting either consciously or subconsciously pre-tenses when shooting the gun (or any gun) and causes flyers.

The first step in ensuring you don’t suffer from scope bite, is the learn to shoot!

More than once I have watched a shooter fail to place the buttstock securely into their shoulder pocket (or out further on the peck depending on shooting method). Alternatively, sitting the firearm too high – where half the buttstock is not resting on anything (yes there are certain methods involving an AR where this is intentional) – regardless – the rear of the rifle is not properly supported – and when the firearm is shot, the rifle pushes back, the position collapses and the whole rifle comes back towards the face. 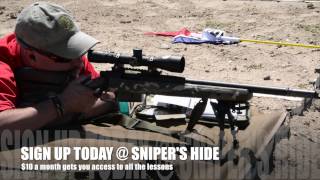 By ensuring the firearm is securely supported, using muscles, bone and body weight to absorb the recoil – really, the whole body should move back with the gun, instead of the body staying where it is, and the firearm coming back into you.

I think some of this comes from new shooters being ‘afraid’ of the gun – and unwilling to hold them securely – as I often say – no matter how ‘low recoiling’ the gun is – it’s still a gun, guns go bang, hold onto them!

Now, it’s all very well telling people to make sure they are straight behind the rifle, making sure they are set up to absorb all the recoil with their body, but what happens when you don’t have the opportunity to get into a perfect supported prone position?

Especially in hunting and field shooting, you often don’t have the opportunity to get the perfect setup.

Well, it’s a case of make-do – but what you don’t want to be doing, is getting yourself into such a level of compromise that you lining yourself up for some damage. If it gets so back that you are performing contortionist tricks just in order to get the shot, there is also a really good chance that the shot isn’t going to work out either.

Instead, you are likely better to take a moment longer, get into a proper position, make that shot, save the face. 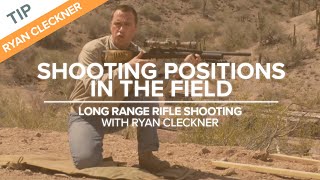 Now, all of this is compounded if your rifle also isn’t correctly setup. And, if you took it straight from the shop and shot it – there is a real good chance it wouldn’t be. More than once, I have seen scopes set up to, well, I don’t know what – but not right.

Set it up right

Taking the time to get your eye relief setup correctly not only ensures you are not having to crane your neck forward (breaking that shoulder position and setting yourself up for issues) – but it also contributes to better and more accurate shooting.

We will cover off correct scope setup (the practical side) in another article – but essentially, you need to make sure that when you get behind the rifle, comfortably – the scope is neither too far away (causing scope shadow and requiring you to move closer in) nor too close (shorting the distance between your head and the scope). 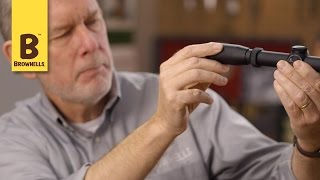 Just because the rifle turned up, set up a particular way, doesn’t mean that’s how it has to stay. In fact, I often suggest to people the first thing they should do with a new gun, is strip it right down and then put it back together – this not only develops familiarity with the system but also provides a good first check that everything is working like it should.

Most stores, without you being there, are not going to get it right. They can’t – you will shoot and therefore want a rifle set up slightly differently to them – to me for that matter.

In addition, also be wary of shooting a gun set up for someone else – if they are significantly shorter or taller than you – you might also find a less than an optimal setup that could come back and bite you!

Also worth noting, is that some scopes just seem to have a shorter eye relief than others. My Z3 Swarovski being a good example – it’s a phenomenal scope – but I wouldn’t put it onto a heavily recoiling rifle – because I would have to set it up uncomfortably close to my face. It’s another thing to consider when matching rifles and scopes together. More recoil – ideally, more eye relief.

Some scopes have extra long eye relief – designed for scout rifles, ARs or lever guns – these are designed to be looked through from a way back – and will often only be available in the smaller zoom ranges.

Hang on! It’s light, and a handful.

So, talking of recoil – obviously – a higher recoiling rifle can set you up for higher likely hood of a scope bite – especially if it’s not setup correctly for you.

With the trend of building superlight magnum hunting rifles (like all carbon fibre 300 Win-Mags) – people can often be setting themselves up for mischief – especially if they don’t also take the time to learn to correctly shoot this type of rifle. Yes, I feel too light is possible.

So – in short – avoiding scope bite, scope strike, scope rash, a face full of scope is easy – provided you –