What is your suppressor point of impact shift?

Recently when heading out to Woodhill, a requirement was no suppressors. I can kinda understand the reason for this – but to me, it just removed an important safety device that I really like to use. Stalking with earplugs/earmuffs doesn’t work, and unsurprisingly, I ended up with ringing in my ears after firing with an un-suppressed firearm. However; more importantly, it also brought home the simple fact that I didn’t actually know what my POI shift without my suppressor was.

Shooting the rifle with the suppressor as I did up at Balnagown a little while back, is well, easy. No ringing. Also, the suppressor really reduces the kick of the rifle (not that 7mm08 has much kick anyhow).

I understood that expected suppressor point of impact shift was down with the suppressor on. The weight of the suppressor works with gravity to pull the muzzle of the barrel down a little and the suppressor will also provide some harmonic dampening. How much though I had no idea. So it was off to the range to actually test it out. The results surprised me.

So. It seems that on my X-Bolt, the Hardy Suppressor actually causes it to shoot high. From the target above (at 100m) – with the suppressor on, it shoots pretty much where I want to (because that’s where it is Zero’d). Take it off and it shoots around 77mm lower. That’s 2.75 moa, roughly (my maths may be out slightly) or 11 clicks on my Z3.

It seems the combination of my rifle with it’s now shortened barrel, potentially including some gas interferences (though it seems totally consistent), shoots the opposite of expected suppressor point of impact shift.

Now, should I have to shoot the rifle again without the suppressor (which I really hope I don’t) I know I can dial 11 clicks up (because it shoots low without the can on) and my POI will be back where it should be.

Remember – yours will be different 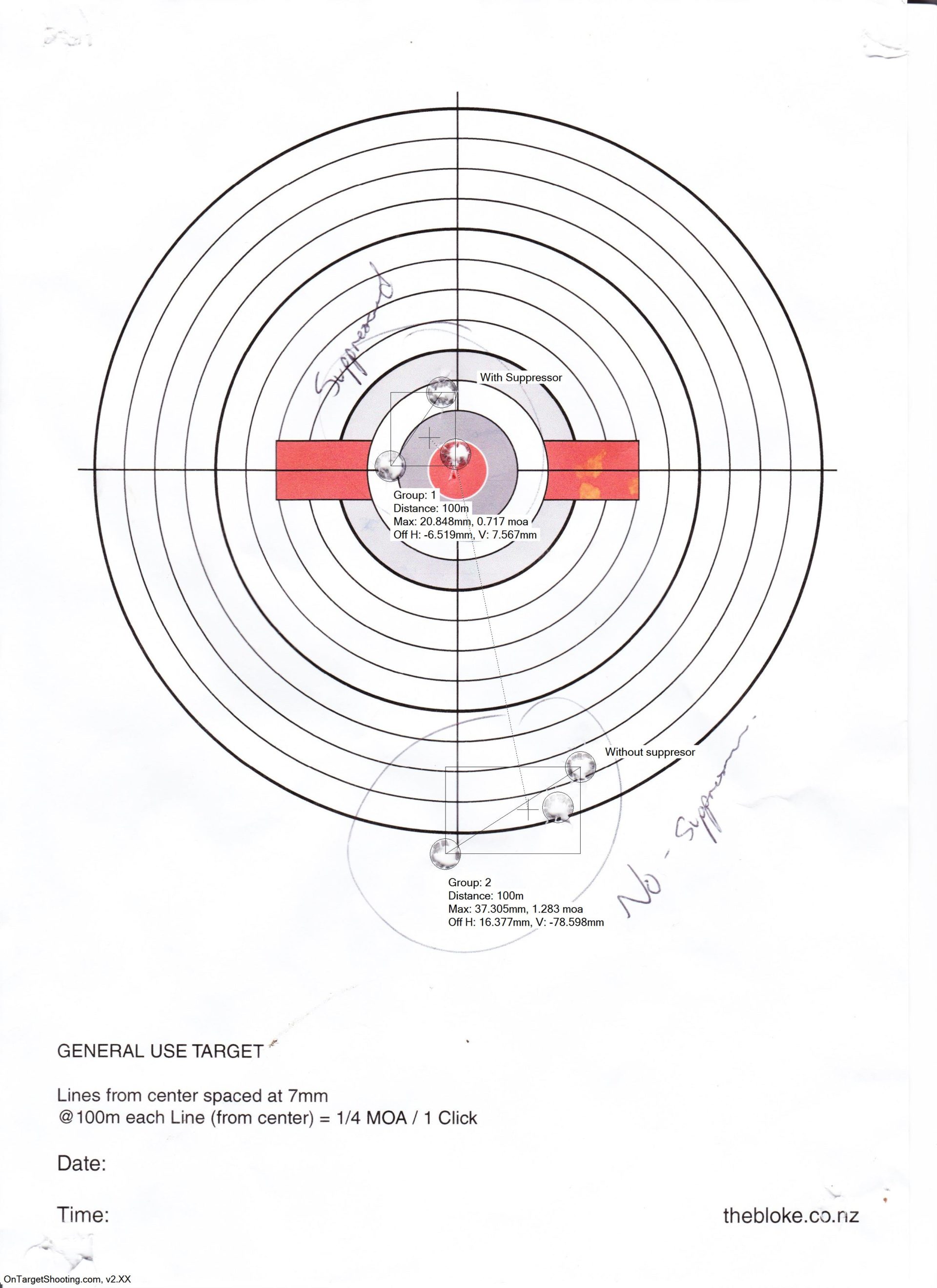 Your rifle, suppressors, rest, everything combines as a system. A unique one – even if you are using the same rifle and same can, your ammo is different, and you may experience a different result. You need to test your own gun.

Even though in theory you may know what should happen – this just goes to show there are exceptions. It also means that the dear I got was really quite a lucky shot. But I will take it!

What is your suppressor point of impact shift? Do you know? Maybe it’s worth finding out!