Starting to sort the recovery rig…

After my recent requirement to help dig/pull a couple of lads who had managed to get themselves stuck in the Coromandel - I thought it was well over time to start sorting out the recovery gear for the truck.
Read more

A trip to the top of the Coromandel

To me, the true Coromandel is only reached once you have passed through, well, Coromandel - actually - even higher - with Colville (northernmost town of any note on the peninsula) representing a homecoming of sorts.
Read more

I liked the idea of externally storing the smelly stuff. In addition, the ARB design gives you a few extra pockets for storing stuff that you often need when working on or around the outside of the truck. In my case, the obligatory Morley's on one side, some rubbish bags and window wiper fluid on the other, and a couple of levelling blocks in the side.
Read more

I decided towards the beginning of the year that I wanted a wagon for tramping – particularly after heading up a few trail-heads along long, unmaintained gravel roads – I was always dubious if we would get back out in Alice’s Hatchback, should the roads get muddy.

I weighed up between a relatively ‘safe’ 4×4, like a Surf or Patrol, and something with a little more character.

I have found, over the years, that I am personally a lot more happy spending money on maintaining something with a bit of character, and I know that regardless of what I ended up with, it was going to be a little bit older, and was going to require money and maintenance. I was also keen to get something ‘relatively’ simple – something with carbs, something I could learn to do the basic jobs on, and essentially up-skill myself a bit on mechanical work.

I started looking around a vehicles, and soon, unsurprisingly, ended up looking at the Landrovers. In particular, the Defender series. Look on Trademe for second hand vehicles, I started spotting a particular model called the Stage 1 – not a Defender as such, but more the precursor, or prototype for what would become the quintessential off road Landie.

The New Zealand Army used to use the Stage 1 as a primary vehicle – so there are actually quite a few around NZ, it various states of repair – from wrecks, to nearly fully restored examples. While somewhat quirky, and definitely a bit of work, they are also considered a good project vehicle – with spares and information easily available.

I headed down to Waiuku, had a look, kicked the tyres and headed around the block to see how it ran. The owner explained all it’s quirks – but essentially, it looked like an old, but good example of a Stage 1.

In hindsight, yes, I should have gotten it looked at by a independent mechanic, but since it had a brand new warrant on it I figured it would be compliant in regards to the basics – I knew it needed a good tune, and some superficial bodywork – that was what I expected – no illusions that it was going to take some work. Sold!

Unfortunately, as I found out when I took it down the the extremely helpful guys at Bramble Downs (a specialist Land Rover mechanic in Kumeu) – the new warrant really didn’t mean much at all.

I took it to Bramble Downs, essentially to start planning a little bit of work on it – a basic tune, removing the carborettor restricters, the basics. The plan was to pay them to give it an initial once over, while I hung around and started learning how it all fitted together.

Unfortunately, the moment it was up on a hoist, the guys started highlighting some fairly major concerns. Suddenly, instead of a basic service – I was looking at a list of reasons it shouldn’t be on the road!

This was 1 month and 9 days after it passed a WOF Check on February 15th, a warrant issued by Beaurepaires Waiuku.

For Immediate Attention and Safety:

Both Front marker/side lights not working

Serious Structural Rust in Rear Chassis around Rear Spring Mounts and where the Tow bar is mounted DO NOT TOW WITH THIS VEHICLE!!!!  Mounting points rusted away and Bolts look suspect

Left out rigger half missing/ cut away Rust?

Left Passengers floor cut away and very badly patched up

Left Rear brake steel pipe not fixed down and stretched too tight, at risk of being broken if going off road (must be replaced for safety)

Both Front King Pins Badly out of adjustment / worn

Rear Tray not mounted, supported and secured to vehicle properly

Both doors only close on first catch

I took a couple of photos as well – more out of disbelief at the state of things.

I thought, to just confirm, I took it down to the local VTNZ – and put it through the process of getting a warrant. 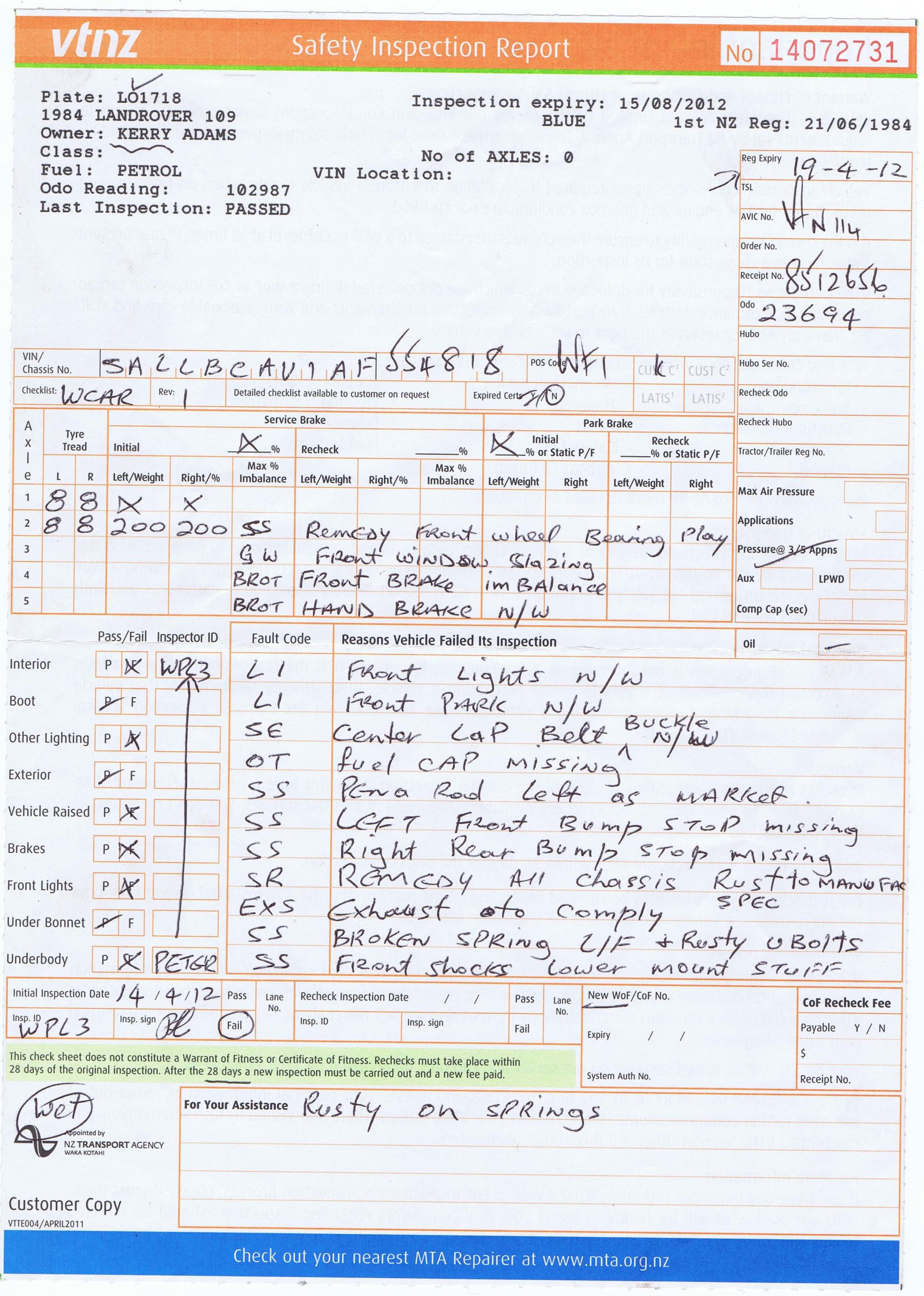 They told me to get it off the road.

I took it back to Beaurepaires Waiuku, the company that had issued the original warrant.

They agreed to repair the issues, and I picked it up around 5 months later and took it back to VTNZ. It failed again. 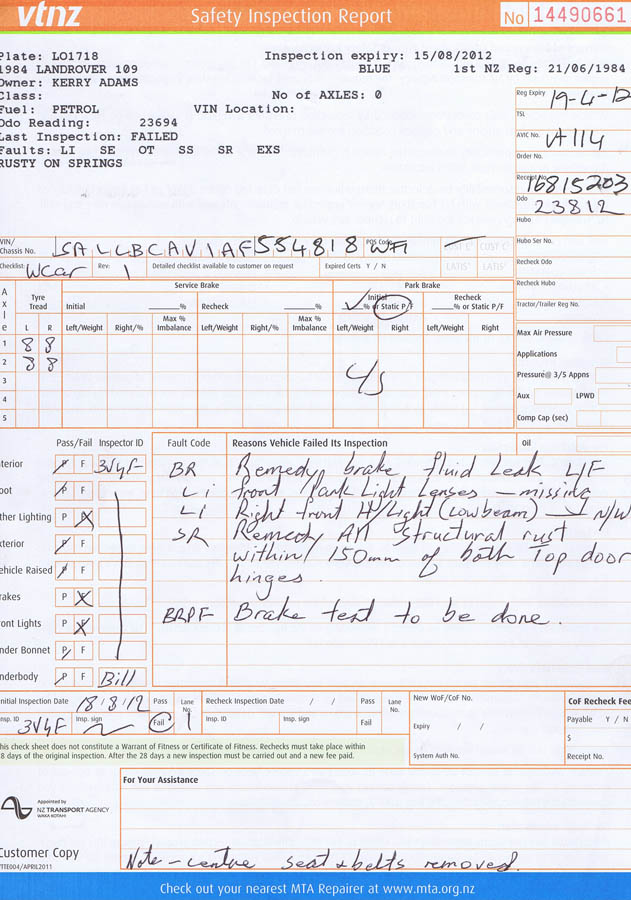 I decided at that point not to take it back to Beaurepaires.