While I shoot a lot of factory ammo (mainly...
Read more

Is premium hunting ammo worth it?

Depends, I guess. Do you want to miss less?
Read more

People reload their own cartridges for a variety of reasons. For some it is financial, some it is because you can't source the ammunition any other way and for some because they want to maximise the performance of their firearm.
Read more 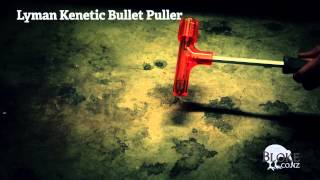 At some point you are going to have ammo you want to get rig of. It might be a failure to fire, some old ammo you are a bit dubious about or a damaged round, but essentially you have a ‘live’ round of some kind of you need to safely render inert.

I have had a few primer failures recently – so had a couple of rounds to get rid of. Putting it on a train track is out of the question and while I have heard you can take it to a police station to dispose of, there is a much easier way.

The Lyman Kinetic Bullet Puller is a simple design, one that multiple manufacturers offer. I am sure they all work nearly identically. It wouldn’t surprise me if it was the same design but just different coloured plastic in the injector.

Operation is simple. It comes with two different sized collets. Just take the one you need, slide it around the cartridge, screw it into the body, a couple of taps on a hard surface and you have a separate bullet. There is a good chance the projectile will be damaged in this process – this is certainly the case with the Nosler Ballistic Tips, do either dump the projectile or save it for dummy rounds. The powder can then be biffed, or in the case of the above demo – returned to the loader.

Really simple, really usefull. Every gun own should have some easy way of disposing of live ammo. The Lyman Kinetic Bullet Puller is certainly one of the simplist. Does what it says on the packaging, and well.

I have heard of people making their own kinetic pullers, but then for the cost of the Lyman Kinetic Bullet Puller, why would you bother? Well worth the investment.