I don't get out hunting as much as I...
Read more 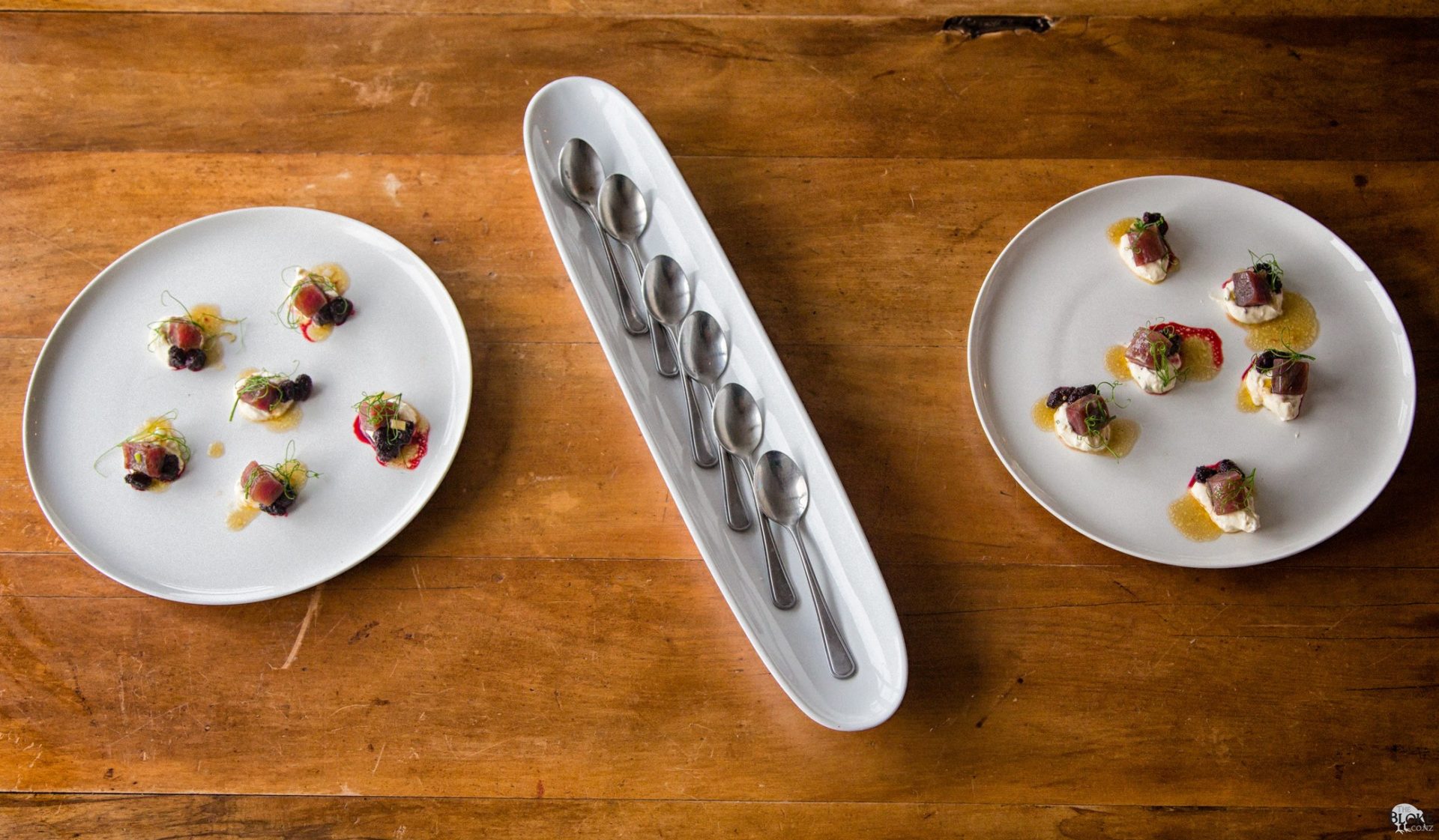 Making the most of meat.

I guess it’s a dangerous assumption – just because someone is a hunter, knows how to kill, process and cut up an animal, doesn’t mean that have any idea how to cook it. Properly.

This was part of the conversation I had over the week with a good friend and phenomenal Chef, Jason McGeorge.

Jason role sees him more writing about cooking than having a hands-on role these days, so whenever he decides he wants to cook, we all make sure we are handy to help make it happen!

Last time we were treated to a several hour-long degustation, this time, we had been discussing putting on a Food Prep Course for Hunters, so it was decided that he would focus on the multiple ways you can cook a Venison Leg.

Keen to avoid the obvious ‘slow cooking’ methods that many people employ to deal with what is sometimes perceived as some of the tougher cuts on a Deer, Jason wanted to showcase just how tender the leg muscle groups can be.

It’s all in the preparation

For Jason, the difference between tough and tender is simply proper preparation and thinking a little more about what you are going to do with the animal. By my observation, it’s also avoiding cooking the crap out of it, like so many people are known to do. I am of the thinking that anything over medium-rare is a travesty – and Venison, being so lean, needs to be cooked even less, for fear of it drying out and becoming chewy.

For many people, cooking a steak is simply a case of throwing it into a frypan into it has browned on both sides, putting it onto a plate and serving it up with two veggies. That’s a kiwi staple. It’s also lead to overcooking most of our meat and robbing it of flavour and tenderness.

If you haven’t read it, go read my article (and video) about cooking steak. It’s a full-proof method to ensure tender, juicy meat, every time.

Cooking it hot and fast, then leaving it to rest would be the summary of the cooking method. The same applies to Venison.

The first two courses were hardly cooked at all, in the traditional sense. The first was a cure involving sugar and salt, essentially cooking the meat (a little) without heat – utilising chemical reactions between the spices and flesh.

Next up, Carpaccio.1 This is one of my favourite ways of preparing a back steak. Simply quickly searing the outside, then nearly freezing, enabling you to cut it up thin and serve. In this case, with a salad of sorts, featuring pea tendrils, raw red onions, microgreens, beetroot, capers and grapefruit. Each mouthful presented a new combination of flavours, each delicious.

There is something I should point out here. Yes, this meal took a long time to prepare – but that is primarily because there was multiple smaller dishes instead of the traditional larger servings. Individually, they didn’t take a whole lot more time than any other meal.

The ‘theme’ for the night, apart from showcasing Venison, was shared dishes. A little bit of a trend at the moment, each plate essentially had two small servings on it, designed to be shared. It certainly brings on more of a community or social style of eating – as you are navigating another set of utensils around the plate – and essentially enjoying the food in conjunction with someone else. Not dissimilar to the notice of breading bread and sharing a camp-fire.

Talking of campfires – it’s ironic, that one of the most common ways to cook one of the best cuts of meat is often the worst. The amount of tenderloin that has been subjected to overcooking on a fire, then eaten straight away is criminal. I figure there is a good chance that it’s often cut out of the animal mid rigour mortise, and cooked in a way that certainly isn’t going to help with the tenderness. Sure, it will be tender – that cut is the best in the animal, but what Jason’s cooking really hammered home, was that properly prepared, all the cuts of meat on the animal can be tender and we are not talking about stews or casseroles. Rump, juicy, tender, with minimal prep, just a bit of knowledge.

I guess it is safe to say the first two2 Venison dishes were just appetisers – lighter options designed to get you ready for something a little more ‘substantial’. In this case – burgers! Well – sliders actually – a full burger would probably have been a little too filling since we were playing the long game, a smaller bun was ideal. Again, leg meat – actually the trim off the ‘steaks’, ground up with some rendered bacon fat and the skimming off the sauce Jason had been preparing for the last course. Pea Tendrils were back again, and gherkins and cheese finished it off wonderfully. One of the juiciest burgers I have ever had.

I like the notion of sliders – you don’t end up feeling like you have just eaten half a loaf of bread.

What also amazed me, about the whole evening, was the amount of improvisation that was going on. Jason had been to the Matakana markets that morning and had returned excited as a little kid with all the swag he had acquired. The basics were already set in stone, but things like the pea leaves, loganberries, celeriac and even the apple glaze were all incorporated as came across them. I think it is a testimony to his cooking skills, specifically, his knowledge of some fundamental techniques that can be applied to whatever you have at hand and the confidence to try things.

Things were getting serious at this point! The steaks came out, unsurprisingly perfectly cooked, yet again highlighting the fact that ‘tough cuts’ can easily be made into tender, delicious meals with a little bit of know how.

It’s been interesting, talking to a few people about this evening since it happened – a surprising amount of people have either never eaten any venison at all, or, had it once but found it too ‘gamey’ to enjoy. Again, I think this is often more a result of the way the meat has been treated and cooked that the meat itself. For example, hanging meat too long, or too short a time drastically changes it character and something as leaving meat to rest for the same amount of time you cooked it can make a ‘tough’ piece of meat very tender.

If you don’t count the cake afterwards, I guess… 😉

Jason spotted the Apple Sauce on the kitchen shelves, so made it the part of the final dish. The meat then spent some time in the smoker on the BBQ before a final quick sear and then plating with the tabouleh and chutneys.

Of course, while the meat was the central aspect of the dishes – it was often the sides in the form of the sauces and relishes than really brought out the flavours in the meat. Simple cooking methodologies with lots of flavours!

It was an honour to once again be cooked for by Jason – it’s great to see a craftsman, in any craft really get to express themselves and have some fun experimenting and creating.

We have already begun discussing the next evening – game birds sound like the go!

Again – thanks to Jason for the cooking, Sarah for the Cake and Cathy and Clayton for hosting us! Looking forward to the next one!