Winter Warmth: The Wonders of a Merino Buff.

The notion of lightweight hunting is something I have tried out this winter. Last time out, I spent a night out at -4 but still managed to keep everything I needed on my back in a 45-litre pack. Realistically (and next time), I will get away with a 35 litre.

Dropping weight means justifying every bit of kit, multi-use kit or just removing kit from your carry altogether. So a simple piece of clothing that can significantly increase warmth, as well as the potential to provide a pile of functionality is always going to be a win!

The humble buff, a tubular length of cloth, became an outdoors staple a couple of years ago, and while you don’t see all the Day-Glo, garish versions around anymore, carrying one is still a very good idea. Winter or Summer, you will find me with my buff around my neck, around my wrist or around the buttstock of the rifle.

The concept of a Bandanna or Scarf has been very popular in both the survival and bushcraft domains for a long time. A simple piece of cloth actually has a multitude of uses, many of which are also applicable to the buff. Due to its design a buff can be a bit easier to wear. 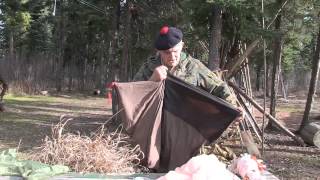 I have bandanna’s as well – I just don’t seem to use them as much. The buff suits me and fits into how I like to do things.

Yes. Without the beard.

I actually have several buffs now – in a variety of materials, cotton, polyester and merino. Generally, unless heat really isn’t a requirement, I am most likely to grab my Marino option.

My Merino Buff is by far the warmest option, so winter, it’s the no-brainer. If it’s warmer out and I am primarily wanting the buff to cover over the face, then the Hunters Element Buff is the go-to option.

I am sure we have all seen the pirate hat option, and the hippyesk hair tie option – myself – I am either wearing it around the neck, up over the face, or during the night, as a beanie.

Around the neck, the buff works to insulate the blood veins that are near the surface of the skin, having the blood passing so close to the surface means if not protected, it actually will dump a lot of head out – much like not wearing a hat when it’s cold. In fact, due to less hair, its possible more heat is lost that way.

Around the neck, the buff also works to seal the layers around the body – helping trap warm air underneath the clothing and helping retain warmth. Start overheating and often all you need to do is take the buff off. I would estimate that the buff works out around the same as a medium-weight sweater. That’s significant for such a light and small item.

For hunting, where you want to remain concealed, it doesn’t make a lot of sense to totally cover yourself except for the face and hands – but more people don’t. If you are going to the effort of utilising camo, go the whole way. In my case, my pasty white hands and face shine out like a beacon – so covering them up makes a significant difference. Gloves are the other obvious part of this equation. Pulling the buff up from around the neck still provides some protection and warmth and also adds to the concealment

At night, once I have settled into the sleeping bag, I can use the buff as a beanie – again, regulating temperature by moving the buff from around my neck to cover the face (beware of condensation) to on the head. Depending on how cold I get.

Hot? Easy solution. Wet the buff in a stream, wear it like normal. The water will evaporate on your neck and keep you cool. Even if you wring it out before putting it back on, there will be enough moisture in the material to significantly cool your neck, the blood passing through it, and therefore you.

Water filter, carrying bag, bandage, there really is a long list of uses for this one item. Most I have never needed it for, it’s stayed around my neck doing its primary job – keeping me warm.

Often, if I don’t want to wear it – I tend to keep it on the buttstock of the rifle. With my hunting rifle, for the bush, I don’t worry about the cheek pad/pack – perfect check-weld isn’t really an issue at 30 meters, and the Cordura of most of them makes a surprising amount of sound when brushing against the bush. Instead, I just double wrap the buff around the rear of the rifle. It keeps it handy.

The humble buff, is one of the most underhyped, but essential parts of my lightweight hunting kit. What’s yours?