While many people assume that you need more zoom the further you get out, more zoom comes with its own downsides. 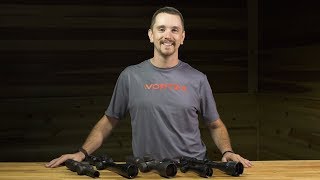 Zoom is the range of magnification that a scope might have. The figure is how many time’s ‘closer’ the image will appear in the scope than it actually is.

For example – a 3-9 scope (a common range) starts at the low end having a three times magnification, and at the ‘long’ end – nine times.

How much magnification do you need? Depends on your intended use and target size. However, distance is not always the determining factor here.

While many people assume that you need more zoom the further you get out, more zoom comes with its own downsides.

Look at it this way – a rabbit and a deer are very different in size, but sometimes engaged at similar distances. While shooters have often put a smaller scope (2-7) on a 22LR (the bunny buster) than the deer hunting rifle (3-9) – wouldn’t the extra magnification actually make more sense on the bunny gun – where you are going to have a smaller target?

Conversely, too much zoom comes with more weight, with a narrower field of view, and with the temptation to zoom in too far – resulting in losing the target in the scope or having to deal with the amount of movement, mirage and general finickiness that a high mag zoom can induce. I have watched1 many field shooting competitors loose a piece of steel at 800 meters, then spend way too much time trying to scope the countryside in the scope – before finally realising they should power down, find the target again, and power back up. In fact, for a lot of 600-1k shooting – 15x power seems to be a sweet spot – on steel targets that is. Start shooting tiny little groups on paper, and a massive 40x or more can become useful.

While everyone develops their own preferences, and there are some caveats, some common ranges would include –