Gidday guys, so I’ve got a great bit of kit to review today. I’ve been wanting a decent pair of boots for a while now to replace my ill-fitting Hi-Tec Altitude boots, and after doing a LOT of research, I finally decided on a pair of Hanwag Tatra Goretex boots. I’m very particular about what I like in a boot, such as full leather with no bits of Cordura which is harder to clean mud out of, also as few seams as possible – again easier to clean. I really like the rubber protective rand around the lower parts near the sole. The obvious criteria of fit and functionality are very important also, and the Tatra seemed to tick nearly all the boxes. This pair cost me about $300 NZD delivered from Germany, about half the price of what they sell high-end boots for here in NZ, so well worth waiting for the shipping time. I took a bit of a leap of faith ordering these without trying them on, however, I was impressed with the Lowa brand of boots and having tried those on in the shop I was fairly certain that I wasn’t gonna end up with a lemon.

This model is the little brother to the fairly well known Alaska which is a fairly recent arrival to the New Zealand market, but at this point the Tatra hasn’t appeared anywhere here yet, I found I couldn’t find any local shops that stocked any Hanwag boots at all, only one or two shops down south had them at the time of this review. The Hanwag Alaska is the cousin of the Lowa Tibet boot, and Lowa is fairly well established as a premium brand in NZ. I wanted to do a video review on this boot as when I was looking for an indepth review, there were only a few and none in English, so I’ll do my best to give you a good insight into this boot.

Now a lot of people here in NZ haven’t even heard of Hanwag (pronounced ‘Hahn-vahg’) before so I’ll fill you in on a quick bit of history first. Most of you would have heard of Lowa (pronounced ‘Lo-vah’). Well the guy who started Lowa (Lorenz Wagner) had a brother called Hans Wagner who started Hanwag. They lived in Germany and were sons of a shoe maker. They started their respective companies making hiking and ski boots in the early 1920s and thus began a pedigree of excellent handmade boots. Later on Hans’ nephew Josef joined him and eventually took over the company. Think of Mercedes and BMW but in footwear and you get the idea. When I tried these on, my feet instantly said ‘Ahhhhh’ and felt very comfortable and supported with no hard spots anywhere. Hanwag employ cutting edge technology and techniques with their selection of modern products in the manufacture of all their footwear. All of their craftsmen and women take great pride and care in everything they do to make sure that the end user is very satisfied with the product. They have also got factories in Croatia and Hungary in towns that also have a rich history of boot craftsmanship so the brand ideals of high quality are not lost. This particular boot was made in Croatia.

When choosing a brand of hiking or hunting boot, don’t do what I did the first time and go cheap and cheerful. Believe me when I say I wasn’t very cheerful about 4 hrs into a 2 day hunting trip, and by the end I had black toe nails from where they were rubbing on the front of the boot. It’s totally worth spending more and getting something really decent, you are spending many hours and KMs on your feet, so you need to take care of them! Buy once, cry once.

When choosing your size of boot, make sure it fits snugly everywhere around your foot not just the ankle so your foot doesn’t slide around inside, with about a thumb width of space between the end of your boot and toes, usually the big toe is the longest. A good rule of thumb is one size up from your regular shoe size assuming your shoes fit properly of course. That’s the mistake I made with my first pair of boots, which lead to my big toes getting smashed when walking downhill. Unless I wore a thick pair of socks my feet would slop around and rotate inside the boot and even with the thick socks it wasn’t great. The Tatra is snug everywhere up to the toes in any choice of socks, where there is a nice little bit of space for them to wiggle around a bit.

The Tatra comes in quite a few variations which are the Goretex GTX, (if it doesn’t have GTX in its title it will be leather lined), Narrow, Regular, and Wide fits, a taller Top model, also a ‘Bunion’ model which is designed for those people with bunions to be wider in that area of the boot only, and of course Mens and Womens in all of the above, so just about every foot is catered for with this one. Goretex will dry out quicker and be more waterproof and wick away moisture better than the leather lined, however the leather lined is said to be a bit more comfortable to wear, conforming to the contours of your foot a bit better. They only seem to sell Wide fit boots here in NZ as that is what fits most people, however I have a narrower than average foot, so this is the regular fit Goretex boot.

Hanwag have an index rating system for their boots based on support and stability and strength and flex of the sole. Class A is your easy trail day shoe, B is suitable for challenging hikes in lower mountain ranges and easier treks, including off-trail use and ascents, C is for rocky and steep terrain, D is for upper alpine work and climbing Mt Everest. The Tatra model is in the B class, having a bit more flex in the sole than the Alaska which is in the C class. I noticed a few people online found that the Alaska was just too solid for their style of hunting having a slightly stiffer shank plus the full rubber rand, and having tried the similar Lowa Tibet in the shop, I’m inclined to agree as I’m probably going to spend more of my time hunting hills and forest rather than rocky mountain type terrain. The Tatra is a fair bit lighter than the Alaska at 730g per boot size 7 vs 875g in the Alaska. On that topic when they say a boot’s weight is xyz, a manufacturer will often weigh their smallest size so be aware of that. The quoted value may be a good 200 grams lighter than your particular size that you buy, my US size 11 is 880g per boot for example. When looking at the flex of the sole and trying on a boot in a shop, remember that you could be likely to have an extra 20-30kg of backpack and meat on your back which is going to add to your weight, and you need a boot with a good shank in the sole that is going to support your feet with that extra pressure. You will strain your feet and get very sore particularly in the ball of your foot area by the end of a long day without that support. 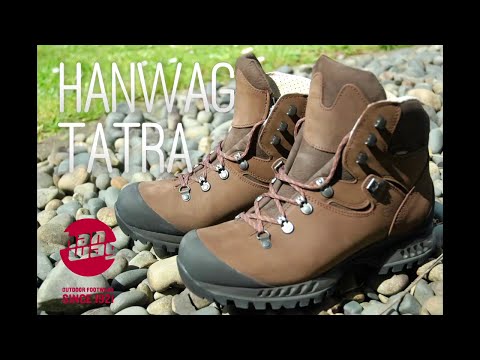 I won’t go into all the individual details of the boot’s construction as you can read all that for yourself on the Hanwag website and I’ll post a link in the description if you haven’t been there already. I’ll just show you what I think of the main bits, starting with the sole which is the Vibram variety, very strong and chunky and a great pattern which looks like it should be very grippy up and down slopes. The internal stiffening shank seems to be just right for what I like, and it also has a shock absorbing area in the heel also. This boot is fully resoleable so when it’s worn out you can get that done as the leather should have quite a few more years use left if you’ve taken care of it. The leather is premium nubuck with a hydrophobic treatment right out of the box, I also bought a tin of their leather wax which is made from beeswax. I’ve always used Dubbin which is the traditional kiwi leather treatment of choice, its ok and keeps the leather supple, but it’s not very waterproof and it’s made from animal fat which can encourage the growth of a wee microbe which eventually rots stitching and can get mouldy if left uncared for a long period. So I’ll be putting a good lather of this beeswax stuff on my boots and we’ll see how that goes. Inside the ankle of the boot is a strip of the leather lining you’ll find on the leather lined model, this feels really soft and comfortable. Onto the lacing system now and you’ll see the ball bearing loop points are really the bees knees for getting it all tight with one pull. You then lock it off at the clamp hooks and it won’t loosen off as you lace up the upper hooks. You’ll also notice that in smaller sizes such as the photos on their website there are two rows of upper hooks, whereas on larger sizes like mine they have 3 rows.

Ok so I’ve had these boots out on a few hunts now, and I can say without a doubt that they were worth every penny. They’ve kept my feet warm dry and comfortable, no sore toes or blisters at all without having to wear them in which is saying a lot, as every boot I’ve had up till now has needed to be worn in before being comfortable enough to be trusted with a big outing. I’ve had a few deer on my back going up steep slippery hills, and the grip and shank support in the sole was great. I can highly recommend the Tatra and indeed any boots of the Hanwag or Lowa brands. Do your research and shop around, try them on and even take a heavy pack as well to see how the sole supports the extra weight.

Bike24.com was the website I got these from, they had good customer service, and when you change the country to NZ it knocks the tax off them. Not many websites do that! NZ customs didn’t charge the tax on them coming into the country as they were under the threshold, but even if they did, it would still be far cheaper than the ridiculous prices they charge here.